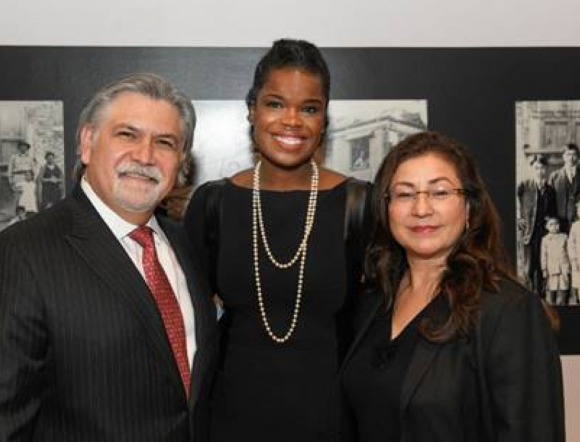 In celebration of Hispanic Heritage Month, Cook County State’s Attorney Kimberly Foxx presented awards to outstanding citizens who have made contributions to the Latinx community through their professional and personal lives during a ceremony last night. Foxx honored Judge Sandra Gisela Ramos and Federico M. Rodriguez at the event, which took place at the National Museum of Mexican Art in Chicago’s Pilsen neighborhood.

“In our efforts to create a safer, stronger Cook County, we approach every case with integrity, demand accountability, and have an increased presence in the community,” said State’s Attorney Kim Foxx. “Representation matters. Judge Ramos and Federico Rodriguez exemplify the word ‘Humanitario,’ and I am thrilled to honor them and celebrate their contributions.”

Judge Sandra Gisela Ramos is a first generation Mexican American, one of six children.  In 2010 Sandra Ramos was elected Judge of the Cook County Circuit Court. She was the first Hispanic woman to be endorsed by the Democratic Party in a County-wide judicial race.  In 2014, Judge Ramos and several colleagues started the Illinois Latino Judges Association (ILJA), an organization that coordinates efforts with the Hispanic Lawyers Association of Illinois and the Puerto Rican Bar Association, to promote and educate qualified potential candidates who are interested in becoming a judge. Judge Ramos continues to advocate, empower, educate, and inspire the Hispanic community today.

Federico M. Rodriguez was born and raised in Mexico City, coming to Chicago as a teenager. While working full-time as a Spanish-language interpreter for the Circuit Court of Cook County, Federico earned a degree from DePaul University and later attended University of Illinois College of Law.  After graduating law school in 1998, Federico worked as an associate with Lawrence H. Hyman & Associates in Chicago, a firm focusing on personal injury litigation and nationwide high-profile criminal cases. He is currently the principal of Rodriguez Legal Group, LLC. Since opening his first solo firm in 2005, he has obtained over $50 million in judgments and settlements for his clients.

Mark Rivera, ABC 7 News, served as Master of Ceremonies for the event.